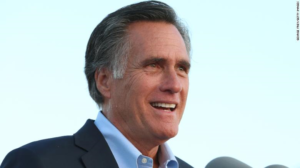 I know that a single U.S. Senate vote does not signal a trend, but I have to be heartened by a principled “no” vote cast by Utah’s freshman Republican senator, Mitt Romney.

The former GOP presidential nominee was the lone Republican to vote against the nomination of Beaumont lawyer Michael Truncale to be a U.S. district judge. Truncale won confirmation by a narrow 49-46 vote to take a seat on the bench representing East Texas.

Why the “no” vote from Romney? Because Truncale describe President Obama in 2011 as an “un-American imposter,” which quite naturally was seen by many as a play into the “birther” lie that plagued Obama during much of his presidency; you know, what he was born in Kenya and, thus, was ineligible to run for, let alone serve as, president of the United States.

“He said some things disparaging of President (Barack) Obama and having been the Republican nominee in 2012, I couldn’t sign onto that for a district judge,” Romney told CNN.

Romney has demonstrated that he won’t be Donald Trump’s “yes man” on all matters that come before the Senate.

Truncale received a grilling from Senate Judiciary Committee Democrats about the remark and he answered that “it is possible” he was expressing frustration over what he called Obama’s lack of “overt patriotism.”

Yeah, sure thing, bub. Suppose he was merely popping off at that false assumption. Doesn’t that, therefore, speak to the man’s judicial temperament, or the lack thereof?

Romney famously said during the 2012 Al Smith Memorial Dinner in New York that he and President Obama — who were locked in a fierce battle for the White House at the time — did not harbor personal “ill will” toward each other despite their widely divergent world views.

Sen. Romney’s “no” vote against Michael Truncale keeps faith with that declaration.