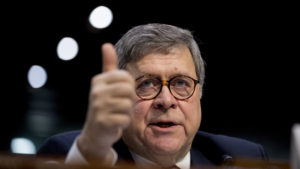 I want to offer Attorney General William Barr a slice of unsolicited advice.

Do not, Mr. AG, follow through on your threat to be a no-show before the U.S. House Judiciary Committee later this week. If you do so, sir, you open the door a bit wider leading to a possible impeachment of the president of the United States, Donald J. Trump.

Barr is considering staying away from the House committee, which wants to question him regarding his handling of Robert Mueller’s report into alleged collusion and obstruction by Trump’s campaign in 2016.

The AG apparently doesn’t like what he senses will be a tough grilling by the panel, which is controlled by Democrats. There are some provisions being built in to questioning, forcing Barr to possibly stay away.

Judiciary Committee Chairman Jerrold Nadler says he’ll have a hearing anyway, with or without the attorney general.

Look, I don’t want the House to impeach the president at least until it has completed its own investigation into some of the questions that Mueller left unanswered when he released his findings.

The impeachment train might become a runaway vehicle, though, if Barr stonewalls the House.

Don’t do it, Mr. Attorney General. Sit before the panel and answer the questions to the best of your substantial ability.