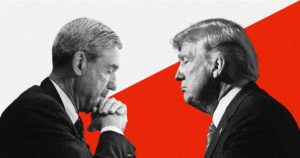 Donald Trump stood before the National Rifle Association and declared that Robert Mueller was part of a so-called “coup” attempt to overthrow the president.

Hmm. Interesting. This is the same guy, Trump, who also complimented Confederate Gen. Robert E. Lee as a “great general.”

Hold on a second.

Mueller was conducting a legitimate investigation into whether Trump’s campaign colluded with Russians who attacked our electoral system in 2016. There was no “coup” being led by the former FBI director and the deputy attorney general, Rod Rosenstein, who appointed him to be special counsel.

As for Robert E. Lee, he led an army of men who actually sought to overthrow the government of the United States of America. His armed forces killed hundreds of thousands of men in pursuit of that traitorous act, which he committed in order to allow states to keep human beings in bondage as slaves.

Isn’t that an act of treason? I guess Trump doesn’t see it that way.

Yet he considers Robert Mueller’s investigation into a legitimate attack on our system of government to be an attempted “coup”?

I’ll say it again and I’ll keep saying it until this man walks out of the Oval Office for the final time: Donald Trump is a disgrace to the office he is utterly unfit at any level you can imagine to occupy.