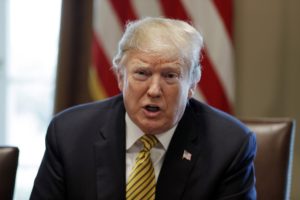 I am shaking my head yet again at something the president of the United States has said.

Donald Trump told the Washington Times that he understands why the late former first lady, Barbara Bush, disliked him so much. “Look what I did to her sons,” Trump said.

Yeah. Look at that.

It won’t happen, ever, but a tiny part of still wishes the president could exhibit the tiniest sense of public decency when responding to critics.

Mrs. Bush died this past year a few months before her husband, the 41st president, George H.W. Bush, passed away. She made her feelings known in a new book, “The Matriarch,” written by USA Today reporter Susan Page. She disliked Donald Trump. That, ladies and gents, is no secret.

As for Trump’s response, he denigrated Jeb Bush as “low-energy Jeb” while they competed for the 2016 Republican presidential nomination. Trump boasted to the Times that Jeb was supposed to win, but was eliminated early. Trump also was highly critical of President George W. Bush’s conduct of the Iraq War; I get that criticism, but then again he did use some inflammatory language to challenge the former president.

It’s not in Trump’s DNA to keep his trap shut. Or at least to offering akin to a statesmanlike acknowledgement that a beloved former first lady is entitled to her opinion.