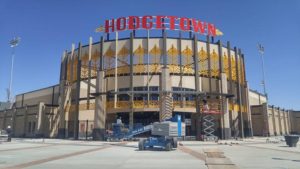 I have been known to speak disparagingly about naming structures after living humans, fearing that the person being honored might do something down the road that would embarrass himself or herself — and the community that honored them.

However, I also have been known to make exceptions, holding to the belief that the individuals honored would never do such a thing.

The picture attached to this blog post illustrates one of the exceptions I have made.

Hodgetown is where the Amarillo Sod Poodles are going to begin playing AA minor-league baseball in a few days. It also is going to be a venue for other community events in downtown Amarillo.

Its name honors a former city mayor and a business tycoon who has devoted much of his adult life to improving the community he has called home. Jerry Hodge is the honoree. I should note that he is so willing to share the spotlight with his wife, Margaret, who also is a force of nature in her own right.

I’ve known Jerry and Margaret Hodge for many years; I know Jerry Hodge better than I know Margaret. I’ve known Jerry Hodge as a hard-driving pharmaceutical company mogul who built Maxor into a worldwide concern. He had left the mayor’s office by the time I had taken up my post in early 1995 as editorial page editor of the Amarillo Globe-News, but he never really has stepped completely out of public view.

He has been an outspoken advocate for the city and for the Panhandle. He and Margaret used their influence and their financial resources to lure the Amarillo Sod Poodles from their former home in San Antonio to the High Plains. They also have been big hitters in bringing the Texas Tech Pharmacy School to Amarillo — which, given the Hodges’ ties to Maxor was a no-brainer. Most recently they donated $10 million to Tech toward its planned construction of the school of veterinary medicine in Amarillo.

So, you see, my aversion to naming structures after living human beings isn’t ironclad and all-inclusive. The Hodges have given much back to the community that has enriched them. It is only fitting that the ballpark formerly known only as the “multipurpose event venue” would carry their name over the main entrance.

I am proud to know them.