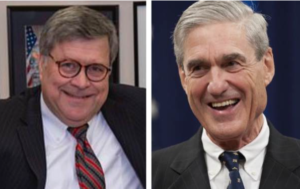 I had this naïve thought that Robert Mueller’s report to the attorney general into whether Donald Trump’s campaign colluded with Russians would be the end of the story.

The special counsel would wrap up his findings, hand them to AG William Barr, who then would tell the public what Mueller had found out. We’d all know — for better or for worse — what went down during the 2016 presidential election.

Then this happened: Mueller essentially cleared Trump and his team of conspiring to collude with Russians who interfered with our election; but then he remained silent on whether Trump obstructed justice by seeking to block any further examination into top aides.

What’s more, Barr issued a four-page “summary” of Mueller’s findings. Not everyone believes Barr’s assessment of what Mueller determined. They contend that Barr is a Trump toadie, handpicked by the president to run interference for him.

Now we’re waiting on the full report from Barr, who promises “transparency.” I am forced to ask: How much of it is he going to show us?

I tend to trust William Barr. I also tend to believe him when he says he will let Americans see as much of Mueller’s findings as he can under the law. I do not need to know the deepest national secrets. All any of us ought to see is the body of evidence that Mueller had collected and from which he drew his conclusions.

Of course, I do have questions now about why Mueller would remain silent on the obstruction of justice matter. Barr said Mueller determined that even though he lacked credible evidence of obstruction, he didn’t “exonerate” the president; Trump, quite expectedly, calls it all a “total exoneration,” which is yet another Trump lie.

I’m going to pose another question: If we presume the worst, that Barr withholds parts of Mueller’s report that might be damaging to the president, would the special counsel be willing to blow the whistle on what the AG is hiding from public view?

Oh, how I want to know the whole truth. My hope of knowing it upon the end of Robert Mueller’s probe has been quashed.