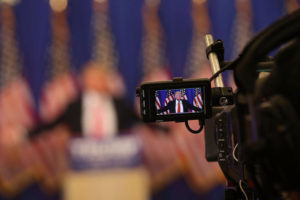 Donald J. “Faux Tough Guy in Chief” Trump needs to toughen up, suck it up and go with the flow.

He won’t, of course. I just thought I’d admonish him anyway.

The president seems to want to take action against comedy shows (for crying out loud!) that make fun of him. “Saturday Night Live,” a show he says he doesn’t watch, is a favorite target of his threats of political revenge.

Trump talks tough. He bellows about how we oughtta take protesters out back and “beat the sh** out of ’em.” He sidles up to worldwide strongmen, while denigrating our own intelligence experts. Oh, and while he continues to pile on to the memory of a legitimate American military hero, the late John McCain.

He bullies his foes via Twitter, hurling insults and innuendo at them willy-nilly.

But the dude just cannot stomach the idea that others poke fun at him. Donald Trump is a wuss in wolf’s clothing.

I am reminded at this moment of a politician I used to cover when I worked in Beaumont as editorial page editor of the Beaumont Enterprise. The late U.S. Rep. Charles “Good Time Charlie” Wilson was an East Texas Democrat known for (a) his love of the military and (b) his desire to surround himself with attractive women.

Wilson also was an effective congressman who understood the role of the media that covered him. We covered his comings and goings at the Enterprise and on occasion we would chide him for things he would say or do.

We had a cartoonist on our staff, Jerry Byrd, who would illustrate our newspaper’s criticism with his editorial-page artwork.

What was Charlie’s response? How did he react? He would call us and ask us for the original cartoon so he could display it on his office walls in Washington, D.C., or in his district office in Lufkin, Texas!

Yep, Wilson was a grownup who knew that criticism from the media came with the job for which he took a solemn oath.

Donald Trump has yet to understand that truth about public service. I doubt seriously he’ll ever get it.