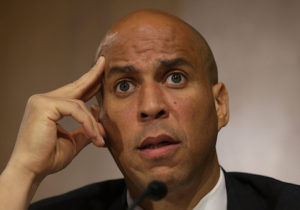 The U.S. senator from New Jersey and one of dozens (or so it seems) of Democrats running for president has pitched a notion of setting term limits for members of the U.S. Supreme Court.

C’mon, senator. Get a grip here!

The founders had it right when they established a federal judiciary that allows judges to serve for the rest of their lives. Lifetime appointments provides judges — and that includes SCOTUS justices — the opportunity to rule on the basis of their own view of the Constitution and it frees them from undue political pressure.

Sen. Booker is a serious man. I get that. He has an Ivy League law degree and is a one-time Rhodes scholar.

He’s also running for a political office in the midst of a heavily crowded field and is seeking to put some daylight between himself and the rest of the Democrats seeking to succeed Donald Trump as president.

Term limits for SCOTUS justices isn’t the way to do it.

We don’t need term limits for members of Congress, either. My view is that lifetime appointments for the federal judiciary has worked well since the founding of the Republic. There is no need to change the system based largely on a knee-jerk response to the current political climate.