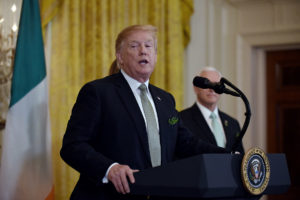 Innocent men and women don’t say things such as what came from the president of the United States late this past week.

Donald Trump continues to call Robert Mueller’s investigation into alleged “collusion” between the Trump campaign and Russians who interfered in our 2016 election “illegal.” He calls the probe a “witch hunt.” He says now that there should be “no Mueller report” issued to the attorney general, let alone released to the public for its review.

Is that what an innocent man would say?

I don’t know what the special counsel has compiled. No one outside Mueller and his team of legal eagles knows what he’s going to submit to Attorney General William Barr. Donald Trump doesn’t know. The AG himself might not yet know.

As for the legality of Mueller’s investigation, I happen to believe — as do most Americans — that Mueller is conducting a perfectly legal and appropriate investigation.

A witch hunt doesn’t produce the indictments, guilty pleas and prison terms that have come from this investigation.

Robert Mueller is as former White House lawyer Ty Cobb described him; he is an “American hero.” He is a dedicated prosecutor, a former FBI director, a man of impeccable standing and reputation. Mueller has worked diligently for presidents of both political parties.

Mueller embodies many of the qualities that Trump lacks. Let’s try a dedication to public service. Or perhaps we can compare Mueller’s combat service in the Marine Corps in Vietnam to the bone spurs that kept young Donald Trump out of the military (allegedly) during the Vietnam War. Let’s also examine the air-tight manner in which his investigation has proceeded, compared to the sieve-like environment that plagues the White House.

Donald Trump doesn’t sound like an innocent man when he continues to rant about Robert Mueller’s investigation.

Let the man finish his task, Mr. President. If the POTUS is innocent, we’re all going to know about it in due course.