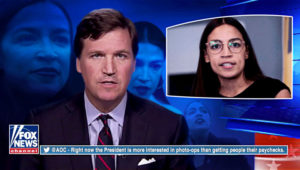 The Onion is a brilliantly written satire of current events. It is so brilliant that one might actually be inclined to believe its content is true. It isn’t.

Still, the publication has produced something that might as well be true, given the conservative media’s fixation with a rookie Democratic congresswoman from New York City.

The Onion “reports” that Fox News has launched a new premium channel that devotes 24/7 coverage of U.S. Rep. Alexandria Ocasio-Cortez, aka AOC, the well-known (already) socialist who represents a New York City congressional district. Ocasio-Cortez made a big splash in the spring of 2018 when she defeated longtime Rep. Joseph Crowley in the Democratic Party primary; Crowley was considered a potential speaker candidate and already was a member of the Democratic caucus leadership in the House of Representatives.

Ocasio-Cortez was the main attraction at the recent Conservative Political Action Conference, with right-wing pundits and pols standing at the podium pontificating on how she wants to destroy the American way of life.

Yep. This freshman member of the House — one of 435 members of the lower legislative chamber — is going to dismember the American economic and political superstructure all by her lonesome.

Ladies and gentlemen, we are ascribing way too much power to an individual who doesn’t deserve it. She hasn’t earned it. She is a loudmouthed congressional newbie who has managed to capture the attention of the right wing and has ingratiated herself with the far left of her own Democratic Party.

She isn’t the bogeywoman the far right calls her.

Still, I am amazed, astonished and astounded at the attention she is attracting from those who detest her politics. By demonizing her in the manner that they are doing they are elevating her profile to a far greater level than she deserves.

Give her time. She might eventually earn the iconic status some have bestowed on her. Or . . . she might flame out.

Leave it to The Onion, though, to highlight the far right’s goofy fixation with AOC.