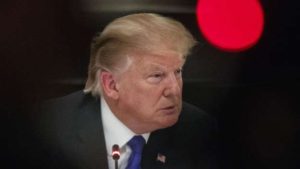 Donald Trump made a solemn vow while campaigning for the presidency of the United States of America.

He said he wouldn’t be a typical Republican. He said he would leave Medicare, Medicaid and Social Security spending alone. He wouldn’t touch them. He would solve the nation’s budgetary woes — as he defined them — without laying a hand on those valuable social programs.

So, what does the president do when he presents his fiscal year 2020 federal budget? He proposes cuts to Medicare by $845 billion, cuts for Medicaid by $1.5 trillion and reduces Social Security spending by $25 billion.

His record-setting budget of $4.75 trillion does add money for the Department of Defense.

My point here is that Donald Trump persuaded many American voters that he would leave these coveted programs alone.

OK, he has officially stuck it in our household’s eye. My wife and I are retired Americans. We draw from our Social Security accounts and we also depend on Medicare to help with our health care needs; I also have Veterans Administration benefits to assist with my health care issues.

Is this the bargain the nation got when it elected this promise-breaker president of the United States?

One thought on “Promise made … promise broken”