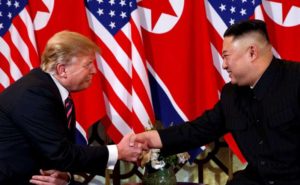 This one doesn’t compute, Mr. President.

You travel to Hanoi to meet with your new BFF, North Korean tyrant Kim Jong Un, expecting to score some kind of monumental “deal” to persuade Kim to do away with his nuclear weapons.

The deal making falls through. You walk away. I get why you did it, since you couldn’t get the deal you wanted from Kim.

Then you blame the House Oversight and Reform Committee hearing on Michael Cohen, who spent the day calling you a racist, cheating con man. He called you a shmuck, Mr. President. Many of us agree with your former friend/confidant/fixer.

His testimony didn’t undermine your talks with Kim Jong Un, Mr. President. He was talking about matters far removed from issue at hand in Hanoi.

So, why are you laying blame at the feet of Democrats?

I heard your statement about criticizing the president while he — I mean, you — are overseas negotiating with an overfed tyrant who kills his own people through starvation, torture and assorted methods of execution.

The blame for the failed summit rests with you and Kim Jong Un. Not on Democrats, not on Cohen, not on the brutal storm that is ravaging the middle of the country.

Take responsibility for the times you fall short, Mr. President. Stop looking to lay the blame at the feet of others.