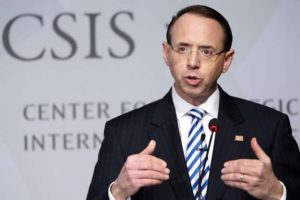 Such as what he said about his new boss, Attorney General William Barr.

Rosenstein said Barr will “do the right thing” regarding the possible release of the Robert Mueller report, which the special counsel looking into the alleged “collusion” with Russian government operatives is going to send soon to the AG.

Hmm. The “right thing,” yes? How does the deputy DOJ official — the man who appointed Mueller to the job of special counsel — define the “right thing”? I hope it means that Barr will release as much of the report to the public as he can.

I believe strongly the Muller report needs to be placed before the public for our perusal and determination. He has spent a lot of taxpayers’ money examining whether the Donald Trump presidential campaign colluded with Russians who attacked our electoral system in 2016.

Rosenstein is leaving the Justice Department next month. Barr has just taken over a department wracked by controversy and chaos. The president has exacerbated it by his hectoring of former AG Jeff Sessions, who did the right thing by recusing himself from the Russia probe. Rosenstein then selected Mueller to lead the probe into alleged collusion. Meanwhile, the president — who proclaims his total innocence of any collusion — has called the investigation a witch hunt.

What is the “right thing” for Barr to do? Let the public see what is in it, what it lays out, what Mueller has learned.