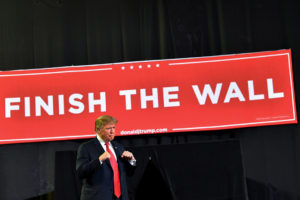 Robert Reich is a vocal critic of the president of the United States. I mean, he served as labor secretary in the Clinton administration. His progressive credentials are established.

He wrote this on Facebook today in response to Donald Trump’s declaration of a phony “national emergency”:

Just hours after Trump declared a national emergency to secure funding for his nonsensical border wall without congressional approval, he jetted off to Mar-a-Lago for a weekend of golf and relaxation. Excuse me, but shouldn’t the president be in the White House during a national emergency?

The truth is there is no emergency. Border crossings are at historic lows, immigrants commit crimes at lower rates than native-born Americans, and a wall would do little to curb the flow of illegal drugs. This entire crisis is designed solely to score points with Trump’s political base and consolidate his own power.

What Reich neglected to mention in this message — although I am certain it wasn’t lost on him — was that Trump himself actually dismissed the “national emergency” in a rambling, incoherent “press availability” on the White House lawn.

Trump knows there’s no “emergency” on the border. He made the declaration, it seems to me, because he wanted to create a pretext to erect something to which he can attach his name.

OK, then. Let’s call it The Trump Wall.