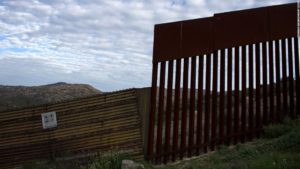 I cannot possibly profess to know all there is to know, but one current issue has me baffled in the extreme.

I am unable to discern where along our nation’s southern border we are experiencing a “national emergency.” Donald Trump is now threatening to declare that such an emergency exists if he doesn’t persuade Congress to appropriate $5.7 billion to build The Wall.

The president has just backed down from a standoff he engaged in with congressional Democrats. The partial government shutdown was called off. Trump didn’t get any money for The Wall. He said he would keep the government shuttered for as long as it takes until he got money for The Wall. Then he caved, blinked, backpedaled, retreated . . . whatever you want to call it.

Now comes the threat to declare a national emergency. What does it mean? It means that Trump can deploy military personnel to build The Wall and move money appropriated for other projects to finance its construction. Former U.S. House Armed Services Committee Chairman Mac Thornberry, a Texas Panhandle Republican, has said such a move runs counter to Pentagon policy and that the military mission should not include wall construction.

What’s more, if he does declare such an emergency, the president can expect an immediate and ferocious legal challenge from congressional Democrats.

I do not live along the border, but I do live in a border state. Texas shares the longest stretch of any of the four states that border Mexico. The entire Texas-Mexico border is along the Rio Grande River. In some areas along that river, it is virtually impossible for anyone to enter one country from the other.

Back to my point. Is there really and truly an emergency occurring down yonder? I have trouble believing that the illegal immigration situation today is any worse than it has been for decades. Indeed, I keep hearing about surveys that tell us that illegal border crossings have declined in recent years. Border Patrol agents have been arresting and deporting undocumented immigrants for as long as the agency has existed.

Trump has sought to scare the daylights out of Americans by implying that hordes of illegal immigrants are pouring across the border to commit all manner of crimes against unsuspecting Americans. I will admit I haven’t spent a lot of time on the border, but I have been there and have wondered where the hordes of criminals have been hiding.

I am simply not going to accept the president’s assertion about the need to declare an emergency. I really wonder if it really exists.

One thought on “Is it really a ‘national emergency’ on the border?”