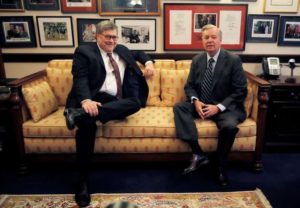 I have hope that U.S. Sen. Lindsey Graham has some deep inside knowledge that he’s now sharing with us.

The South Carolina Republican says that Attorney General-designate William Barr is going to let special counsel Robert Mueller finish the job he began more than a year ago. His task is to determine whether the allegations of “collusion” between the Donald Trump presidential campaign and Russian operatives who attacked our electoral system are true; he also is examining allegations of obstruction of justice, of conspiracy and perhaps all kinds of matters related to the 2016 election and beyond.

Trump selected Barr to succeed Jeff Sessions as AG, whom the president fired because he had the gall to recuse himself from the Russia probe. Sessions had the good sense to recognize potential conflicts of interest, given his role in the campaign and in the transition. He couldn’t investigate himself, so he handed it off to Deputy AG Rod Rosenstein, who then appointed Mueller as special counsel.

Mueller is getting down to brass tacks, or so we are being led to believe. He has extended the term of a grand jury another six months. Mueller reportedly will finish his probe in late February or in March.

He needs to conclude this investigation on his own terms, under his own power and without interference from the new AG, or the White House or the president himself.

Rosenstein reportedly is going to leave DOJ after Barr gets confirmed. Barr will testify next week before the Senate Judiciary Committee. I am quite sure senators will ask him directly whether he intends to let Mueller do his job. Sen. Graham says he will.