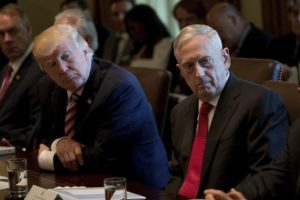 James Mattis’s stunning resignation as defense secretary poses the next obvious question for those of us who are concerned about the future of our national defense policy.

Who in the world is Donald Trump going to find to succeed the man who quit because of serious policy differences with the White House?

More to the point: Will the next defense boss — unlike the warrior/patriot who’s leaving — going to be a sycophant who’ll do the president’s bidding without challenging him in any fashion?

Let’s lay this out right away: Donald John Trump is the first president in U.S. history who has (a) no military experience and (b) no prior government experience. I don’t begrudge the president for lacking any military background; he’s far from the first one to bring that lack of credential to the nation’s highest office. But the absence of both backgrounds, taken together, puts this matter into a whole new context.

Mattis quit over differences on an array of policy matters with the president. The deal breaker appears to be Trump’s sudden decision to pull our troops out of Syria, leaving the battlefield while the fight against the Islamic State is still under way. Mattis opposed that decision. The president didn’t heed his advice, or the advice of any other military or diplomatic expert with access to the Oval Office. What in the world does it tell us that Russia — which is propping up the Syrian dictator — endorsed Trump’s decision to withdraw from Syria?

Is the president, therefore, going to look for someone who shares his world view on how to shaft our allies, kowtow to dictators, allow the know-nothing commander in chief to do as he pleases whenever he pleases?

Mattis, a retired U.S. Marine Corps general with more than four decades of service to the nation — much of it on battlefields around the world — is none of the above. Moreover, he is revered by the men and women who serve under him. He commands respect because he gives respect to our allies and those who are thrust into harm’s way.

I am officially frightened.