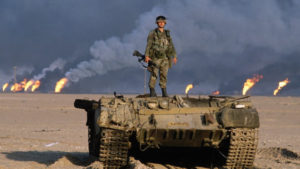 I will now offer you my brief statement of support for the late  President George H.W. Bush’s decision to end the Persian Gulf War the way he did it.

They’re going to bury the former president later this week, but before they lay the great man to rest, let’s revisit one of the signature events of his presidency.

Iraqi dictator/madman Saddam Hussein sent his army into Kuwait in August 1990. He took control of the country. He seized the nation’s oil fields. President Bush was, naturally, quite alarmed. He summoned his national security team to the White House. They began plotting a strategy to respond.

He went to the United Nations. Bush then got on the phone and enlisted the support of 33 nations. He assembled an enormous international coalition.

The UN then approved a resolution authorizing and endorsing military action if the need arose. Bush and Secretary of State James Baker sought a diplomatic solution. They failed.

The massive force had gathered in the area near Kuwait and Iraq. They were ready. The UN resolution limited the mission to one element: get the Iraqis out of Kuwait.

The president gave the order. The aerial campaign started, pounding Iraqi defenses in Kuwait — and in Iraq.

The armored divisions breached the Kuwaiti frontier and within days the Iraqis were routed. They were on the run. Our fighter aircraft strafed the fleeing troops, killing thousands of them on the road to Baghdad.

Then the president called a halt to the fighting. We lost fewer than 200 American lives in the fight. The Iraqis were defeated.

But some critics at home — notably the “chicken hawks” who didn’t understand the consequences of war the way Bush 41, a World War II naval aviator did — wanted our forces to march all the way to the Iraqi capital. They wanted to capture Saddam Hussein, presuming he would surrender the way his troops did on the battlefield.

President Bush knew better. So did Defense Secretary Dick Cheney. Same for Joint Chiefs of Staff Chairman Army Gen. Colin Powell, who saw combat during the Vietnam War. They knew what the UN mission allowed. They weren’t going to overstep their authority.

The end of the Gulf War delivered for a time a period of relative stability. Saddam Hussein — who never set foot outside of Iraq — was thoroughly contained after our forces destroyed his supposedly vaunted Republican Guard in Kuwait.

The containment wouldn’t last, tragically, after we invaded Iraq in March 2003 intent on removing Saddam Hussein.

However, there can be little doubt as we look back at the Persian Gulf War that we set forth on a specific mission. We accomplished it. We restored — yes, with mixed success — a sense of stability in a volatile region.

Taking the Gulf War fight all the way to Baghdad was a prescription for geopolitical disaster. I am grateful to this day that President George H.W. Bush reacted with reason, calm and with good judgment.