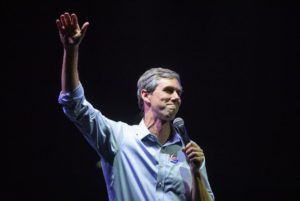 Roll that around in your mouth a time or three, maybe four.

Might it be what we hear in Jan. 20, 2021 at the next presidential inauguration? Some progressive pundits and pols are hoping it happens. I remain dubious, but perhaps a little less so than I was immediately after Beto O’Rourke lost his bid to become the next U.S. senator from Texas.

O’Rourke came within a couple of percentage points of upsetting Republican Sen. Ted Cruz. For a Democrat to come within a whisker of beating a GOP Texas politician has many on the left still all agog.

O’Rourke has changed his tune. He said the Senate race was 100 percent on his mind. He now says he is not ruling out anything. That he might be a presidential candidate in 2020. He’s going to take some time with his wife, Amy, and the three kids he featured prominently in his 2018 Senate campaign to ponder his future.

O’Rourke’s congressional term ends in early January. He’ll return home to El Paso and give thought to running for the highest office in America.

My desire for the Democratic Party remains for it to find a candidate lurking in the tall grass that no one has heard of. Beto no longer fits that description. He became a national phenomenon with his narrow loss to the Cruz Missile.

He’ll keep fighting Donald Trump’s desire to build a wall along our southern border; he’ll fight for comprehensive immigration reform. He said he plans to stay in the game. He plans to have his voice heard.

He might want to parlay his immense national political star status into a legitimate campaign for the presidency. My hope is that is he stays on the sidelines for 2020. However, in case he decides to take the plunge into extremely deep political water . . . well, I’m all in.