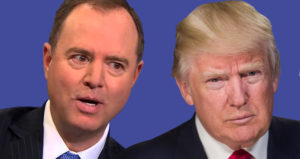 I have tried seemingly forever to avoid criticizing public figures on at least two levels. That is, two aspects are off limits.

I avoid making fun of their physical appearance and also their name.

Donald Trump has managed during his meteoric political career to do precisely both of those things. He has poked fun/mocked a New York Times reporter’s physical disability; he has made snarky — and unfounded — remarks about the physical appearances of former Republican presidential primary foes Carly Fiorina and Rand Paul; he’s denigrated the appearances of women who have accused him of sexual assault.

Now he has bastardized U.S. Rep. Adam Schiff’s name with that vulgar tweet in which he refers to the incoming House Intelligence Committee chairman as “Little Adam Schitt.” The California Democrat has taken the hideous insult with a good bit of humor, but hasn’t dwelled on it. Those of us on the sidelines are making the big deal of it. As we should, in my humble view.

Even a few conservative voices are speaking out against Trump’s insult against Schiff. This came from radio talker Laura Ingraham:

“Being tough is great, we all love it. Tough, strong president. You don’t have to ridicule Adam Schiff’s name. It’s an unforced error. There’s no reason to do that.”

Ingraham is giving the president the benefit of several doubts. She’s far more tepid in her criticism than I would be. Still, at least she has said something about it.

Trump’s use of Twitter to insult foes at this level reveals a serious flaw in his own emotional, intellectual and perhaps even psychological makeup.

Good grief, the president is free to criticize people’s policies, their public statements, their actions in front of their constituents.

But their appearance? Their family name?