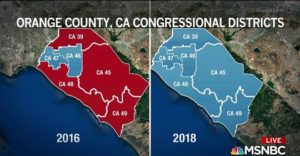 This is a map of a southern California county that President Reagan once said was the place where “good Republicans go to die.”

Is this a bellwether of what is happening to the national political landscape? I am not smart enough to answer that one directly. Although I would venture to suggest that President Reagan, wherever he is, would be mighty displeased at how this map demonstrates the chameleon-like nature of a once-faithful Republican stronghold.

I strongly doubt the Democrats who seized control of Orange County, Calif., are of the pinko/socialist variety of, say, Alexandria Ocasio-Cortez, the young woman elected to represent a New York City district in the next Congress.

Still, the new congressmen and women coming from Orange County are going to align with the party that opposes Donald John Trump’s agenda — whatever it entails. You see, I have difficulty wrapping my arms around the president’s agenda, because it changes daily, if not hourly. Which is what happens when a party is led by a man without a semblance of a political philosophy or moral grounding. But … that’s another story for another day.

Pundits nationally are wondering if Orange County portends a sea change for the 2020 election cycle, the campaign for which began the moment the results came in on the 2018 midterm election.

The U.S. House has flipped from GOP to Democratic control. As more races are settled in districts around the country, the Democratic grip on the House keeps tightening just a little more. The U.S. Senate is nominally more Republican than before the election; Democrats, though, made a fight of it in places where they weren’t supposed to do well … such as in Texas!

I believe the map shown on this blog post just might signal a result that illustrates a rejection of Donald Trump’s leadership, no matter what the president might say to the contrary.

That, I also believe, is a good thing.