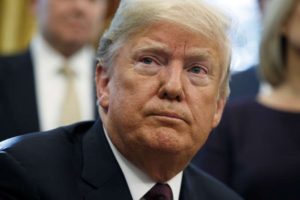 I guess hell has frozen over, finally.

Donald J. Trump says he “regrets” not attending a Veterans Day commemoration at Arlington National Cemetery. He stayed at the White House during the day. He had no public events. His schedule was clear.

The president did manage to fire off nine tweets during the day.

Yet he now expresses a bit of regret over his no-show at Arlington.

He made the admission to Fox News’s Chris Wallace, to whom he said “in retrospect” he made a bad call on a day set aside to honor the nation’s veterans.

It’s an unusual step for a president who says he never apologizes. He has said he hasn’t ever sought forgiveness. Donald Trump doesn’t look back on his deeds or statements. Introspection isn’t included in the Trumpian vocabulary, according to the president.

What do we make of this semi-contrition?

I don’t know. It might signal an awakening by this president. Or, it might just be a touch of pandering.

I’ll reserve any final determination for later. In the meantime, I’ll hope for the best — but prepare for the worst.