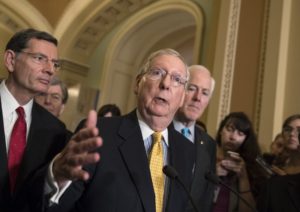 I gave myself one of those proverbial forehead slaps when I heard this tidbit: U.S. Senate Majority Leader Mitch McConnell wants there to be more “bipartisanship” in the next Congress.

Huh? He said what? This comes in the form of an op-ed column from the obstructionist in chief on Capitol Hill?

It took my breath away.

This is the fellow who said in 2010: “The single most important thing we want to achieve is for President Obama to be a one-term president.”

Then came the congressional Republican caucuses singular effort to repeal the Affordable Care Act. They staged countless votes in the Senate and the House. They came up short. Who led the charge? Mitch did, that’s who.

And then we had the obstruction to end all obstructions in early 2016. Supreme Court Justice Antonin Scalia, a conservative icon on the court, died suddenly in Texas. Justice Scalia’s body had barely gotten cold when McConnell declared that President Obama would not get the chance to replace him.

Oh sure, the president can nominate someone, McConnell said, but Republicans were not going to move the nomination forward. Obama nominated federal Judge Merrick Garland — a supremely qualified man — only to watch his nomination wither and die. We had a presidential election to conclude and McConnell banked on the hope that a Republican would be elected. His gamble paid off with Donald Trump’s election.

Pardon me while I bust out laughing.

The next Congress will be split. Democrats will control the House; Republicans will lead the Senate. Bipartisanship certainly is the preferred way to govern.

That such a call would come from the U.S. Senate’s leading obstructionist gives “gall” a bad name.

One thought on “McConnell wants what? Bipartisanship? For real?”