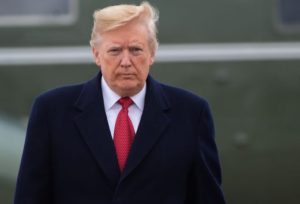 Let me understand this fully.

The president of the United States, Donald Trump, flies to France to honor the fallen soldiers while commemorating the 100th anniversary of the Treaty of Versailles that ended World War I.

Then the rain fell. The president then decided that he couldn’t attend the ceremony at the Aisne-Marne American Cemetery and Memorial near Paris because of “inclement weather.” He sent White House chief of staff John Kelly and Joint Chiefs of Staff Chairman Gen. Joseph Dunford to represent the United States.

Oh, then there’s this. France’s president attended the ceremony honoring the American soldiers who fell. So did the German chancellor and the prime minister of Canada. Other heads of state and government attended as well.

But … not the president of the United States. He couldn’t attend a solemn ceremony at the American cemetery where our nation’s fighting men are buried after enduring far worse than most of us can even fathom. How might they think of a president unwilling or unable to endure some rainfall at their gravesites to pray for their souls and to thank them for their sacrifice?

I’ll conclude with this remark offered by the grandson of the legendary British Prime Minister Winston Churchill, Nicholas Soames, a member of the British Parliament: “They died with their face to the foe and that pathetic inadequate Donald Trump couldn’t even defy the weather to pay his respects to The Fallen.”