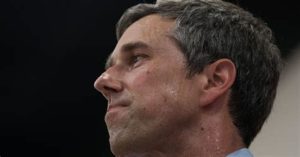 I cannot recall a time — before now — when a candidate has lost a campaign for public office and then is mentioned as a possible presidential candidate in just two years.

Beto O’Rourke came within 3 percentage points of defeating Ted Cruz for the U.S. Senate seat in Texas. O’Rourke is a Democrat; Cruz is the Republican incumbent senator.

That’s a big deal worth mentioning, given that Texas hasn’t elected a Democrat to any statewide office since 1994. The last Democrat to win a U.S. Senate race was the late Lloyd Bentsen, who was re-elected to the Senate in 1988 while he was losing his race to become vice president on a national ticket headed by Democratic presidential nominee Michael Dukakis.

O’Rourke gave Cruz all he could handle. He gathered more than 4 million votes out of 8.2 million ballots cast. O’Rourke ran as a progressive Democrat. He didn’t tack to the middle. He carried his progressive message to every one of Texas’s 254 counties. He told the folks in the Texas Panhandle the same thing he was telling them in Dallas County, Travis County or Harris County.

O’Rourke led a Democratic Party slate of candidates and perhaps helped down-ballot candidates make their races more competitive. Mike Collier lost the lieutenant governor’s race by about 4 percent; Justin Nelson came up short in the race for attorney general by the same margin. Virtually all the Democrats on the statewide ballot were competitive in their races against Republicans; the exception was Lupe Valdez, who got hammered by Gov. Greg Abbott.

So, what does the future hold for Beto O’Rourke? Hmm. Let’s see. Oh, John Cornyn’s seat is up in 2020. Might there be another Beto candidacy for the Senate in the offing? He isn’t being cast aside as a has-been, having lost his bid to defeat Sen. Cruz.

Indeed, he is continuing to be hailed in many corners in Texas and around the nation as a potential political superstar.

And to think that Beto is basking in this standing as a losing candidate. Go … figure.