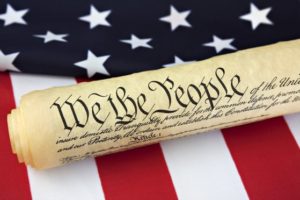 Donald John Trump must believe he is the only man on Earth who has an original thought or an original idea to put forward.

The president believes he has the power to rescind a part of the U.S. Constitution through an executive order. He wants to do so by issuing an order that bans birthright citizenship to anyone born in the United States of America. It’s part of the 14th Amendment, ratified in 1868 … 150 years ago!

He is making this noise as a political stunt — along with his ordering 5,200 active-duty troops to the southern border — on the eve of the midterm election.

Just suppose, though, that Trump were able to enact this birthright citizenship nonsense. What would stop a president, then, from rescinding the clause of the Second Amendment that says the “right to bear and keep arms shall not be infringed.”? Or the portion of the First Amendment that says citizens have the right to worship as they wish, or protest the government’s policies or (and this is one I am sure Trump no doubt has considered) placed restrictions on a “free press.”? How about rescinding the Fifth Amendment clause that protects criminal defendants from self-incrimination? Or the Fifth’s other clause about requiring compensation if the government seizes your property?

If the president had that authority, why didn’t any previous president think of invoking this power to, say, take away our guns or clamp down on the media?

This idiocy is just another example of the ignorance Trump demonstrates about the Constitution and about executive authority. It also appears to betray a desire of the president to lock down control of federal government, placing it in the hands of a single individual.

Here’s the good news, though. Donald Trump’s stated desire to rescind the birthright citizenship to anyone born here — yes, even those who are the products of undocumented immigrants — will not come to pass. The man is just bellowing nonsense.