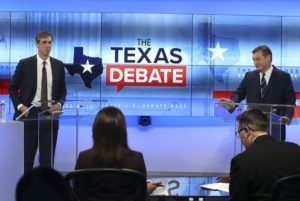 It turns out that Beto O’Rourke, the Democratic challenger, and Ted Cruz, the Republican incumbent, are staking out positive results from the spike in early voting turnout in Texas for this year’s midterm election.

O’Rourke and Cruz are battling each other. O’Rourke is courting young voters, telling them their votes will make all the difference in his underdog effort to unseat Cruz.

Meanwhile, Cruz is banking on traditional Republican strength in the midterm cycle to carry him to another six-year term.

Both campaigns are calling the news of big early vote turnout a victory for their side.

However, I do know this: We vote in secret for a reason. That reason is to protect voters from coercion or pressure. We get to cast our ballots, walk away from the polling booth and keep our little secret to ourselves.

I like it that way, even though I’ve spilled the beans on this blog who is getting my vote in the Senate contest.

And it isn’t the incumbent. Hey, I’m just one vote. The rest of you get to keep your preferences to yourselves.

Just be sure to get out … and vote!