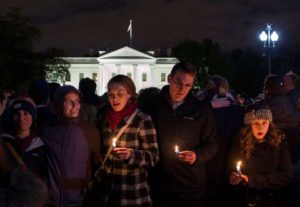 Presidents of the United States inherit an array of constitutional duties and, yes, unwritten and unspoken roles they must perform.

We expect it of them when the moment arrives. It almost always does so without warning.

A space shuttle explodes 73 seconds after liftoff and President Reagan consoles the nation in utter shock; another shuttle disintegrates on re-entry and President Bush performs the same duty; a bomber destroys a federal court building in Oklahoma City, and President Clinton steps up to soothe our anxiety; a madman slaughters 20 children and six teachers at a Connecticut elementary school and President Obama wipes away tears of anguish while honoring the victims.

Then, of course, there was 9/11 and President Bush called on the nation to mourn as one and to fight as one.

Someone mailed pipe bombs to Democratic political figures and a major cable news outlet. What do we get from the current president? We hear him fling blame at Democrats, at the “fake news” media, at his foes.

Donald Trump can recite the correct words. He has done so with regard to the pipe bombs that were mailed to his adversaries. He did so again in response to the massacre at the Pittsburgh synagogue this weekend.

I watch him and wonder whether he feels it. I cannot read his mind or plumb his heart and soul. It’s just a sense I get that he doesn’t embrace this role he agreed to play when he took the oath as president of the United States.

Donald Trump hears the calls for civility in our debate. He then accepts campaign rally crowds’ chants of “CNN sucks!” and doesn’t stop them. He doesn’t tamp down the rage among his supporters. He doesn’t tell them to quell the mob conduct.

Members of the administration have condemned the hatred demonstrated in recent days. The president has joined them in condemning the acts of hate crimes against religious groups … only to crack a joke about canceling an event because of a “bad hair day.”

I wish I could hope the president can learn how to perform this task. I cannot. I have lost that hope.

It saddens me beyond measure.