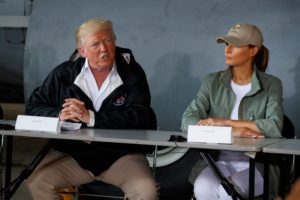 It wasn’t enough for Donald Trump to insult Puerto Ricans by visiting the island territory and tossing rolls of paper towels in one of the stranger photo ops in modern presidential history.

Or that he denigrated the suffering of those Americans by suggesting the death toll (at the time) didn’t rival that of a “real tragedy” such as Hurricane Katrina in 2005.

Now he blurts out yet another evidence-free assertion that Puerto Ricans are squandering relief money on things unrelated to the rebuilding of the island infrastructure. The president says the island government is using the money to pay off debts.

Let me add — with emphasis and a healthy dose of extreme anger — that he’s saying this without providing a scintilla of proof to back up his assertion.

Does this guy have any boundaries of good taste, good sense, compassion, empathy, sincere heartache? Any of it? All of it?

Instead, he continues to fire off accusations, innuendo and gossip about matters about which he knows not a damn thing.

Hurricane Maria destroyed Puerto Rico’s infrastructure, which wasn’t in great shape to begin with. It killed nearly 3,000 of Puerto Rico’s residents, who I should add are U.S. citizens.

Relief was slow to arrive in the wake of the killer storm. Yet the president boasted about the “great job” he was doing.

The mayor of San Juan has engaged in a public spitting match with the president, which I suppose is likely the reason for Trump’s latest baseless tweet accusing “inept politicians” of doing something on which he has no basis.