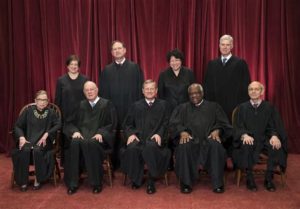 The fight to seat Brett Kavanaugh on the U.S. Supreme Court has turned into a donnybrook, with charges of sexual assault coming from two women who contend the high court nominee misbehaved seriously when he was a much younger individual.

The battle was joined actually before that, when Donald Trump nominated Kavanaugh to succeed Anthony Kennedy on the nation’s highest court.

From a philosophical standpoint, though, I remain somewhat perplexed as to progressives’ angst over the thought of Kavanaugh joining the court. He is a conservative who would replace another conservative on the nine-member Supreme Court.

Yet the fight has been joined. Progressives don’t want Kavanaugh on the court because they fear he could overturn Roe v. Wade, the landmark ruling that in 1973 made abortion legal in this country.

If you think that this has been the Mother of Supreme Court Battles, just wait — heaven forbid — Trump gets a chance to nominate someone to replace one of the court’s four remaining liberal justices.

Justice Ruth Bader Ginsburg keeps emerging as the next likely jurist to leave the court. She said she isn’t going anywhere as long as Trump is president. I’ll take her at her word, provided she can control her own destiny … if you get my drift.

Justices Stephen Breyer, Sonja Sotomayor and Elena Kagan? They aren’t leaving on their own while Trump is in the White House.

Fate does have a way of intervening, so it’s wise to keep your minds open to potential shock waves when any of the four progressive justices decide it’s time to go.

If you for a moment thought this fight over Brett Kavanaugh is as bad as it gets, then you need to take another look across the political landscape and anticipate the eruption that would occur if Donald Trump gets to find someone to replace one of the court’s liberals.

We’d all better hold on with both hands.