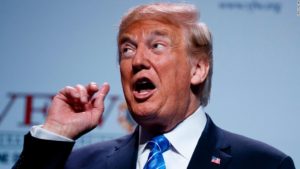 It has become an established fact that Donald John Trump Sr. loves talking exclusively to those who support him no matter what.

He speaks their language; they adhere to his message.

The latest so-called “dog whistle” was blasted out today when the president fired off a Twitter message in which — and this is really rich — he actually denied that nearly 3,000 Americans died from the wrath brought to Puerto Rico by Hurricane Maria.

He blames the death toll on Democrats who are intent on making him look bad. That’s it! The Puerto Rico territorial government’s death toll, revised way upward from a formerly official count of 64 fatalities, is a plot, a conspiracy.

He made this astonishing, idiotic and utterly baseless claim as Hurricane Florence bears down on the Carolina coast, threatening to bring even more havoc to the Eastern Seaboard.

It’s easy to say that the president doesn’t know what he’s talking about. However, he knows precisely what he’s saying. He is speaking to his “base,” the 35 or so percent of voting-age Americans who are behind him to the very end. The base doesn’t care about the truth. It doesn’t care about reality. It cares only that Trump stands up to the so-called “mainstream media,” those who oppose him.

Trump himself declared during the 2016 campaign that he could “shoot someone on Fifth Avenue and not lose any votes.” Americans were aghast in the moment when Trump said it. That boast doesn’t seem quite so ridiculous now.

So he continues to talk to the base. He continues to make assertions without a scintilla of evidence to back them up. Democrats are to blame for the deaths of all those U.S. citizens in Puerto Rico? Millions of illegal immigrants voted for Hillary Clinton in 2016? He watched “thousands of Muslims” cheering the fall of the Twin Towers on 9/11? Barack Hussein Obama was born in Kenya and was ineligible to run for president?

That’s what I call “fake news.”