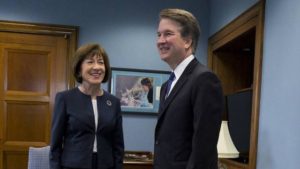 It might be that Supreme Court nominee Brett Kavanaugh has won over a key Senate Republican vote as he seeks to be confirmed for a spot on the nation’s highest court.

If Sen. Susan Collins of Maine is right, and Kavanaugh believes a landmark court ruling on abortion is “settled law,” he has gone a long way toward winning the support of many skeptics across the country.

Collins and Kavanugh met and the senator — a noted GOP moderate lawmaker — said the following to reporters: “We talked about whether he considered Roe (v. Wade) to be settled law. And he said that he agreed with what Justice [John] Roberts said at his nomination hearing, at which he said that it was settled law.”

Those of us who believe in a woman’s right to choose to end a pregnancy consider this an important hurdle that Kavanaugh has to clear if he is to be confirmed to a seat vacated by the retirement of Justice Anthony Kennedy.

I do not believe Sen. Collins is prone to shoot of her mouth without thinking, which gives me hope that her two-hour closed-door meeting with Judge Kavanaugh produced the kind of dialogue she has mentioned. Collins has declared Roe v. Wade to be the benchmark on which she would decide whether to confirm his nomination to the court.

There are many other hurdles, though, to clear. Such as the one about whether the president of the United States can be charged with crimes, or whether he can be compelled to testify before a judicial body. He once thought it was OK to compel a president to testify; then he seemed to have changed his mind.

That will be explored in detail, I presume, when the Senate Judiciary Committee considers Donald Trump’s nominee for the Supreme Court.

However, if Sen. Collins is correct and Brett Kavanaugh doesn’t want the high court to mess with Roe v. Wade, then he well might have won an important skirmish in the battle royale that is shaping up in his confirmation to the Supreme Court.