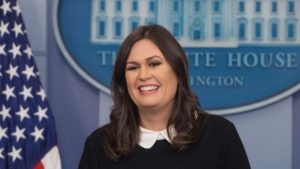 Sarah Huckabee Sanders was served a pitch that she should have hit out of the park. Instead, she whiffed.

It came from CNN White House reporter Jim Acosta, the current chief “enemy of the people,” according to the president and Sanders, his press secretary.

Acosta asked Sanders directly whether she believes as Donald John Trump believes that the media are the “enemy of the people.”

Sanders didn’t take the bait. She didn’t answer the question. She didn’t stand for the right of the media to do their job as prescribed by the U.S. Constitution. She didn’t challenge the notion that the media — which no president has ever liked — is the “enemy.”

The White House press secretary today revealed a potentially shameful side of herself.

See the Sanders-Acosta exchange on the link here.

I don’t know whether Sanders actually believes the crap she defends in the White House press briefing room, or whether she feels some sort of blind fealty to the head of state. Perhaps there’s a third option, that she might fear being humiliated by the president if he perceives that she is straying too far off the marked trail.

Whatever the case, the White House press officer could have assuaged many Americans’ fear that the White House has taken its war against the media to a frightening new level.