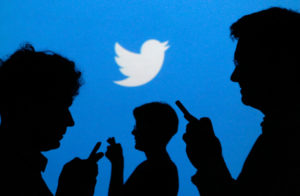 Get a load of a tweet that came from the fingers — reportedly — of the president of the United States.

To Iranian President Rouhani: NEVER, EVER THREATEN THE UNITED STATES AGAIN OR YOU WILL SUFFER CONSEQUENCES THE LIKES OF WHICH FEW THROUGHOUT HISTORY HAVE EVER SUFFERED BEFORE. WE ARE NO LONGER A COUNTRY THAT WILL STAND FOR YOUR DEMENTED WORDS OF VIOLENCE & DEATH. BE CAUTIOUS!

Rouhani made some kind of threat to launch the “mother of all wars” against the United States.

Donald J. Trump answered with this message via Twitter.

I’m a frequent Twitter user myself. Trust me on this: I am not an expert on social media etiquette, not that having good manners is necessarily a requirement at all times. I do know, though, that typing something in all caps denotes an anger that some could construe borders on instability. Is that the message that Donald Trump seeks to convey to the Iranian president?

Yes, he did the same thing with North Korean dictator Kim Jong Un. He threatened him with total destruction. He spoke of the threat of “fire and fury.” Kim and Trump did meet in Singapore. The jury is out on what was accomplished. This much appears to be certain: The world remains under threat of a nuclear North Korea, no matter what the president has said.

So, what’s the deal with this all-cap Twitter message? If the president intends to convey the message that he is so angry that he’s out of control, well, millions of Americans have harbored those thoughts already.