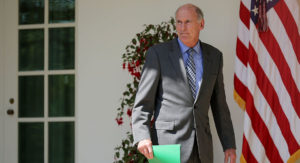 The president reportedly was upset with Coats because of the DNI’s reaction to news that Trump had asked Russian strongman Vladimir Putin to visit Washington in the fall.

Coats, the nation’s top spook — and a valuable member of Trump’s national security team — learned about the invitation while being interviewed on national television.

His reaction was classic. It also was not a reason for him to apologize.

As Politico reported: Trump, according to two outside allies, has grown exasperated with Coats, whom he blindsided Thursday when White House press secretary Sarah Sanders announced on Twitter that the administration was working to bring Putin to Washington this fall. The news landed while Coats was in the middle of a live interview with NBC in Aspen, Colorado.

Truth be told, it as Coats who was “disrespected” by the president who failed to consult with one of his chief national security advisers before issuing the invitation to the very man who attacked our nation’s electoral process in 2016.

The shoe, I’m tellin’ ya, was on the other foot.

Coats, though, felt compelled to set the record straight.

I just wish he hadn’t done it. There was no need.