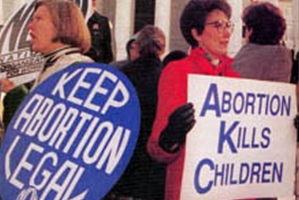 Abortion is coming back onto center stage soon as the Senate gets ready to debate the nomination of Judge Brett Kavanaugh to the U.S. Supreme Court.

I know this won’t happen, but I’ll ask for it anyway. How about calling a halt to the demagoguery that equates “pro-choice” with being “pro-abortion.”

The anti-choice side no doubt will make that unfair assessment as it argues on behalf of Judge Kavanaugh’s nomination by Donald J. Trump. The president has vowed to appoint federal judges who will overturn Roe v. Wade, the Supreme Court ruling that in 1973 legalized abortion.

The ruling has enraged anti-choice advocates for 45 years.

What has been troubling to me has been the conflating of “pro-choice” advocacy with favoring abortion.

I consider myself to be a pro-choice American. I also am vehemently opposed to abortion. Could I ever advise a woman to end a pregnancy? No. Thankfully, I’ve never faced that question from a woman.

To be candid, I’ve never met a single person in my entire life who’s admitted to favoring abortion. And, yes, I have made the acquaintance of many people over the years who have been pro-choice on the issue.

To believe in a woman’s right to make the gut-wrenching choice about ending a pregnancy is not an endorsement of abortion.

Can we please end the hateful demagoguery? Emotions run white-hot enough as it is whenever the topic concerns abortion.