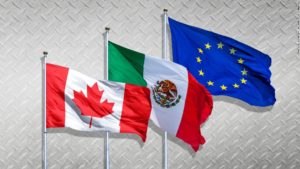 Donald J. Trump has just managed to piddle on his own good-news report. This is weird, man.

The U.S. Labor Department this morning released some seriously positive news: 233,000 non-farm jobs were added to the payrolls in May, which is greater than what economists expected; the nation’s jobless rate fell to 3.8 percent, the lowest rate since 2000.

We’re cheering the news! Yes, the economy is showing signs of rocking along. The president deserves his share of credit for the serious uptick in employment activity.

The previous day, the president announced a huge tariff on imported steel and other goods. Who’s going to get slapped with this protectionist measure? Our major trading partners and allies: Canada, Mexico, the European Union.

Canadian Prime Minister Justin Trudeau made a statement this week about how this policy might make sense to someone in Washington but at this moment he cannot figure out what Trump is trying to do.

I’m not an economist, but I know enough about global economics to understand that trade wars rarely produce winners. Everyone loses. The cost of manufacturing items goes up because companies — that are in the business for make maximum profit — must increase the price of what they produce to cover the cost of sending it to trading partners.

This is classic protectionist policy, favored by union leaders who understandably want to protect their members’ jobs against foreign competitors.

Free trade? It’s out the window, flushed down the crapper, tossed onto the trash heap.

I’m still unclear about what Trump is trying to do.

I’m delighted with the jobs report. The trade war might tamp down a lot of our enthusiasm.