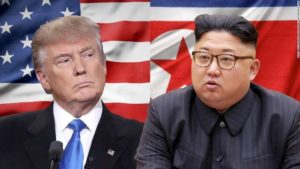 Some folks had been beating the Peace Prize drum for the president on the basis of a proposed summit with North Korean dictator Kim Jong Un. Then the North Korean despot began talking negatively about Donald Trump, the United States, South Korea … you name it.

Now the summit is a goner. It won’t happen as planned on June 12 in Singapore. Will it be revived? Who knows?

I was one who had some hope that it could produce a breakthrough in U.S.-North Korea relations. It won’t.

Perhaps the most troubling aspect of the president’s announcement that the summit had been canceled was his return to the tough-guy rhetoric that mentions the immense power of the U.S. nuclear weaponry. As CNN reported: And he renewed his boasts of America’s nuclear weapons, which he called “so massive and powerful that I pray to God they will never have to be used.”

Then he added this in a statement from the Roosevelt Room in the White House: “Our military, which is by far the most powerful anywhere in the world — that has been greatly enhanced recently, as we all know — is ready as necessary.”

It makes me respond: Duh!

The entire world knows this already, Mr. President. Including Kim Jong Un. There was some thought expressed that Trump’s in-your-face rhetoric about the size of his nuclear arsenal brought about the prospects of the summit in the first place.

I hope we’re not headed back to Square One with Kim Jong Un.

Today, though, was a serious setback in the quest for peace on the Korean Peninsula.