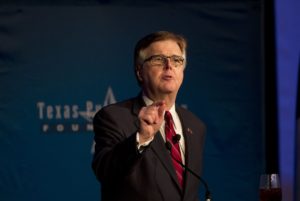 Texas Lt. Gov. Dan Patrick has tossed out an idea worthy of discussion in reaction to the Santa Fe High School massacre of nine students and a teacher by one of the students at the school near Galveston.

The discussion, though, should be brief.

Patrick believes schools are too open, that they contain too many doors. Access is too easy. Gunmen can walk in and blast away, according to Patrick.

His solution? Let’s “harden” the schools, reduce the number of doors.

According to the Texas Tribune: “We may have to look at the design of our schools moving forward and retrofitting schools that are already built. And what I mean by that is there are too many entrances and too many exits to our more than 8,000 campuses in Texas,” he said, citing security at office buildings and courthouses. “Had there been one single entrance possibly for every student, maybe he would have been stopped.”

OK. That’s enough of that.

Schools need those doors to enable students can escape in case of fire and, oh yes, in case someone does open fire in classrooms or in the halls.

Patrick’s idea appears to be well-intentioned. I’ll give him that much. However, it is entirely impractical, given the myriad other hazards that can confront students, teachers and school staffers.

At least, though, Lt. Gov. Patrick has started the discussion.

One thought on “Reduce access at schools? No thanks”