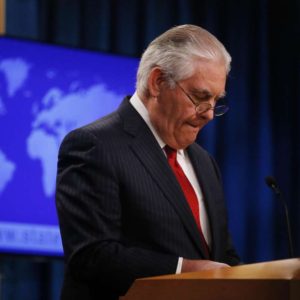 Former Secretary of State Rex Tillerson is now a private citizen. He isn’t a silent citizen, though.

Here is what he told graduating cadets at Virginia Military Institute: When we as people, a free people, go wobbly on the truth even on what may seem the most trivial of matters, we go wobbly on America.”

Who in the world do you think Tillerson is referring to when he said we “go wobbly on the truth”?

He didn’t mention Donald J. Trump by name, but Tillerson appears to be unsheathing his rhetorical weaponry at the president.

He talked about accepting “alternate realities.” Which reminds me of White House adviser Kellyanne Conway’s priceless coining of the term “alternative facts.”

Tillerson’s tenure at State didn’t go well from the beginning. It ended when Trump fired him and then replaced him with CIA director Mike Pompeo. Tillerson left the agency quietly, but to his credit he is not remaining quiet.

“If we do not as Americans confront the crisis of ethics and integrity in our society and among our leaders in both private and public sector, and regrettably at times even the nonprofit sector, then American democracy as we know it is entering its twilight years,” Tillerson said to the VMI cadets.

Yes, we are witnessing an epidemic of “crisis of ethics and integrity in our society.” I believe its source of late has been in the halls of power at the highest levels of our government. I also believe that Rex Tillerson knows that to be true as well.

I am glad his voice is being heard once again. The former chief diplomat has an important message to deliver.