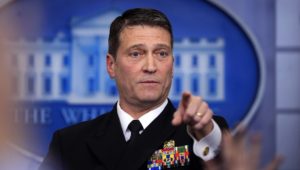 Donald J. Trump took a moment today to condemn the criticism leveled at Dr. Ronny Jackson, whom the president nominated to become secretary of veterans affairs.

Jackson pulled out of the mayhem after allegations surfaced about “hostile work environments,” excessive drinking on the job and over-prescribing of medication.

The president said he told Dr. Jackson — the White House physician — that Washington, D.C., is a mean place. Then he went after Sen. Jon Tester, D-Mont., who made many of the allegations public.

Trump just couldn’t understand — and get ready for this — all the “name-calling.”

I damn near fell out of my chair!

Please, Mr. President. Spare us your faux indignation over “name-calling” of a critical Cabinet pick.

This man, the president, has zero self-awareness, virtually no memory of his own statements and not a scintilla of understanding of the need to find nominees who can pass the simplest test of political fitness.