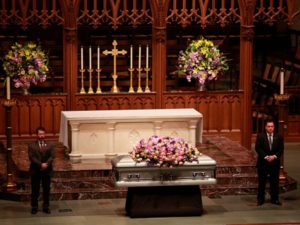 Funerals that honor public figures — notably those involved in some level in politics — have this way of putting politics in their proper perspective.

I just watched a touching tribute to the late first lady Barbara Bush. It made me swallow hard on several occasions, particularly as I heard commentators tell us how bitter political foes could become the best of friends.

Indeed, today at the Houston church where the world said goodbye to George H.W. Bush’s beloved “Bar,” one could see first lady Melania Trump sitting next to Barack Obama, who sat with his wife Michelle next to Bill and Hillary Clinton; George W. Bush sat in the family section across the aisle next to his wife, dad, brothers, sister and their huge assemblage of Bushes.

It strikes me today as we digest the vitriol that emanates these days from the halls of power in Washington that it need not be that way. Much of the commentary today about Barbara Bush spoke of her friendships with Democrats as well as with Republicans. Her husband, after all, is the quintessential Republican, as are her two sons — one a former president, the other a former governor.

But we were told today about Mrs. Bush’s kind heart, her compassion, empathy, her generous spirit, good humor, grit, her tough-love approach to caring for her children and, yes, her friends.

Mrs. Bush’s husband promised to create a “kinder, gentler nation” when he was elected president in 1988. The jury still might be out on whether the 41st president of the United States achieved that noble goal. He practiced kindness and gentleness in his personal life, as did his beloved first lady.

The nation said farewell today to someone who embodied a more genteel time in what has become at times a blood sport. The craft and art of politics aren’t what they used to be. That besmirches politics’ current practitioners, not to mention their once-noble pursuit.

Whenever we say goodbye to beloved public figures, some of us — yours truly included — wish that it might signal a return to a time when political foes could actually become friends.

Is this such a moment? Oh, probably not. My hope, though, does spring eternal.