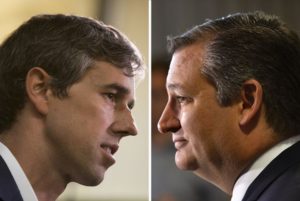 I’ll say it once more with feeling: I want Beto O’Rourke to win the U.S. Senate seat now occupied by Ted Cruz.

O’Rourke is the Democratic challenger to the Republican incumbent.

There. That’s out of the way.

A new poll by Quinnipiac University suggests that this moment, O’Rourke is well within striking distance of shooting down the Cruz Missile. The poll puts Cruz a 47 percent, with O’Rourke at 44 percent; the margin is well within the poll’s 3.6-percent margin of error.

I’m not going to pop the bubbly. It’s only mid-April; the election will occur in November. That’s about a thousand lifetimes, politically speaking.

Texas remains a heavily Republican state. I get that it always remains a huge hurdle for a Democrat to win a statewide race in Texas, something that hasn’t happened since 1994.

With all this talk of a “blue wave” getting ready to sweep over Congress in this year’s midterm election, I am left to wonder if that so-called Democratic wave is going to wash over Texas this fall. If it does, and O’Rourke at least keeps this contest competitive, then it well might portend something quite significant happening around the rest of the country.

To be truthful, it concerns me that Texas has been so maddeningly non-competitive in these statewide races. It really isn’t critical that Texas flip completely from Republican to Democratic leanings. What I would prefer to see is a competitive political climate that keeps the major parties more intellectually honest.

I don’t like one-party dominance. I don’t like it now and I didn’t like it in the Golden Triangle, where Democrats once ruled supreme over the political landscape. That has changed in that corner of the state. I wish it would happen in the Texas Panhandle.

I also am hoping it can happen in at least one highly visible statewide race: Beto vs. the Cruz Missile.