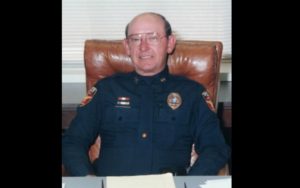 I am sad at this moment, having just learned of the death of a man I considered to be one of the finest law enforcement officials I had the pleasure to know.

Former Amarillo Police Chief Jerry Neal is gone. My memory of his service goes back a good bit.

I arrived in Amarillo in January 1995 to take my post as editorial page editor of the Amarillo Globe-News. Neal had been at his post for 14 years already, having arrived here from Norman, Okla., to rescue a police department that had fallen into serious disrepair.

Chief Neal retired in 2007 after 26 years as the city’s top cop. He modernized it immediately. He introduced a new level of professionalism and service He insisted that the PD clear up cases that had gone unsolved. On his watch, APD established its Citizens Police Academy to acquaint Amarillo residents with the myriad aspects of police work; I happened to be one of those who participated around 2003 in an academy “class.” I found it to be an invaluable education on the difficulties that police officers face every day they go to work on our behalf.

The chief was a progressive police officer and administrator who worked hard to bring his department into the modern age.

I want to share a story about Chief Neal that I’ve repeated many times over the years.

In 2006, the Ku Klux Klan obtained a permit to demonstrate in front of Amarillo City Hall. I thought it would be worth attending this event — with notebook and pen in hand — to witness whatever might happen. Amarillo PD, along with the Potter County Sheriff’s Office and the Texas Department of Public Safety, had set up a huge security perimeter in front of City Hall to ensure minimal contact between the Klansmen and the public.

That was a good call.

Chief Neal was there, dressed — and I use this term cautiously — in full battle gear: blue uniform, flak jacket and all the hardware that police officers wear when facing potential hostility.

I was chatting with Chief Neal when a Klansman walked up and asked Neal, “Uh, chief, may I ask you a question?”

Neal’s offered a classic response. “No,” he responded tartly. “Now … get away from me.”

Oh, how I wanted to high-five him at that moment. I didn’t. His intolerance of a reviled hate group spoke volumes — and I told him so later, in a private moment.

Jerry Neal was a great cop who took seriously his oath to “protect and serve.”