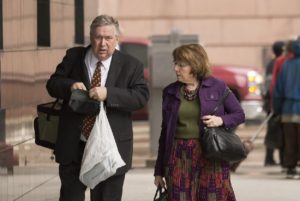 I would feel a hint of compassion for a former congressman.

Except that I cannot.

Steve Stockman once was a Republican member of the House of Representatives. He served two non-consecutive terms. He now faces a possible decades-long prison sentence if a jury convicts him of mail and wire fraud, money laundering and election law violations.

He allegedly treated himself to lots of campaign cash, not to mention using it to pay for non-political related expenses for staffers and family members.

I don’t know whether he’s guilty of the charges brought against him. That will determined by a Houston-area jury. I do know of Stockman as one of the strangest politicians I’ve ever encountered.

He first won election to the House in 1994 as part of the GOP Contract With America tidal wave. He managed to sweep from Congress a powerful Democratic committee chairman, Jack Brooks of Beaumont, who at the time was the senior member of the Texas congressional delegation. Brooks chaired the House Judiciary Committee when he lost to Stockman — who knew next to nothing about the congressional district he represented for two years.

He most recently invited the angry man of rock ‘n roll music, Ted Nugent, to attend President Obama’s State of the Union speech in 2013; that occurred during Stockman’s second term in the House.

He didn’t distinguish himself at all during his time in the House. He ran for the U.S. Senate in 2014, but lost to incumbent John Cornyn in the GOP primary.

Stockman was a goofball while he served in the House. As the Texas Tribune reported, Stockman once had a bumper sticker printed that read: “If babies had guns they wouldn’t be aborted.”

Doesn’t this jokester just crack you up? Naw, me neither.

I would wish him well, if only he had learned how to behave himself while he served in the People’s House.