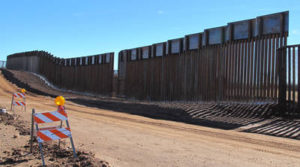 I’m going to speak from the cuff here, but I believe it needs to be said. Donald Trump’s decision to deploy National Guard troops to our southern border appears to me to be a solution in search of a problem.

The president keeps hyping an immigration “crisis” along our border with Mexico. He is implying that the border is being overrun by illegal immigrants. He suggests that the only way to stem that deluge of people sneaking in is to send in ground troops; they need to patrol the border, shoring up security already being provided by Border Patrol, Immigration and Customs Enforcement officials, local police and electronic surveillance equipment.

When did it get to this point? What is the president trying to prove with this initiative?

I don’t get it. I cannot fathom when this matter escalated to a point that requires a virtual militarization of our border with one of our nation’s closest allies.

Barack Obama deported a record number of illegal immigrants during his two terms as president of the United States. George W. Bush created the Department of Homeland Security after the 9/11 attacks, giving the federal government another agency responsible for protecting us against potential terrorist entry.

Trump takes office after campaigning on a promise to build a “big, beautiful wall” and forcing Mexico to pay for it. Mexico won’t pay a dime for the wall.

Why in the world is there this need to send National Guardsmen and women to the border when we have plenty of civilian resources available to do the job of catching people who are trying to sneak into the United States illegally?

This looks to me to be a made-up crisis.