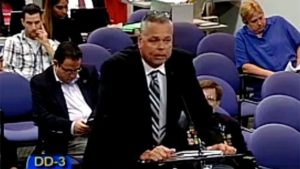 I am terribly conflicted at this moment.

For starters, I am horrified to learn — along with the rest of the country — about the Broward County, Fla., sheriff’s deputy who heard the gunfire erupt at Marjory Stoneman Douglas High School but failed to respond.

The 30-year law enforcement officer — who was on duty as a security officer at the school — was suspended on the spot. Then he took “early retirement.” Broward County Sheriff Scott Israel said the deputy’s failure to confront the gunman was unacceptable and is not in keeping with sheriff’s department policy. He should have “killed the killer,” said Israel.

Seventeen people’s lives might have been saved in Parkland, Fla., had the deputy done his duty, had he responded appropriately and “neutralized” the shooter immediately.

Deputy Scot Peterson messed up royally and 17 families are heartbroken because of his dereliction of duty.

Oh, and then we heard from the commander in chief today. Donald Trump stood at the podium this morning at the Conservative Action Political Conference and said Peterson lacked “courage” because he didn’t rush toward the gunfire.

I believe it is appropriate to remind everyone that young Donald Trump didn’t rush toward the “gunfire” either when the Vietnam War was raging. He received multiple medical deferments relating to “bone spurs” while other young Americans were answering the call.

So … for this president to hurl epithets that question another man’s courage is reprehensible on its face.

That, dear reader, is why I am so terribly conflicted at this moment.

I do not excuse former Deputy Anderson’s dereliction of duty. Nor do I endorse the rhetoric being hurled by those who have the luxury of being far away from the horror or, when someone who had the chance to answer the call to duty, found a way to avoid it.