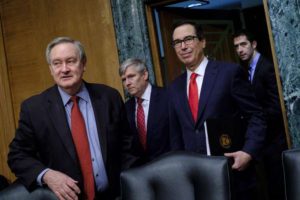 You have heard it said — I am quite certain — that “we ought to run the government like we run a business.”

I ask: How many businesses do you know operate on deficits approaching the scale of what we’ve had in the federal government?

None. Right? Of course!

But now we have the Business Mogul in Chief as president of the United States and those federal budget deficits are approaching $1 trillion annually, a figure not seen since early in the Obama administration.

I should remind you that Barack Obama took office in January 2009 with the economy in free fall. He pushed through some ambitious rescue plans that included tax increases to help pay for the significant boost in public spending to help failing businesses.

The result over President Obama’s two terms was a serious reduction in the annual budget deficit; it shrank annually by about two-thirds.

It’s now heading back up. Congress keeps spending while approving big tax cuts. I believe that’s a recipe for increasing budget deficits, which in turn pile on more money onto the national debt that now stands at a cool $20 trillion.

Treasury Secretary Steve Mnuchin now wants Congress to boost the nation’s borrowing capacity to pay for all this spending.

Just wondering: Isn’t the Republican Party the party of fiscal responsibility? What’s more: How many businesses would survive such exorbitant spending?