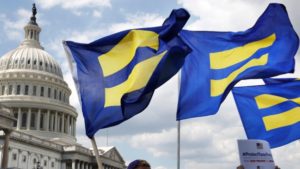 Transgendered Americans can still serve in the U.S. military. They can continue serving their country, fighting for it, defending our way of life against enemies who seek to destroy it — and us.

If the president of the United States were to have his way, he would ban transgendered patriots from serving. Donald Trump has played a shameful hand on behalf of the one-third of Americans who still support him.

A federal judicial panel has blocked the president’s declaration from taking effect, meaning that transgendered soldiers, sailors, airmen and women, Coast Guardsmen and women and Marines can continue to enlist and serve.

Trump’s order denies patriots the opportunity to defend their country? How can that be a good thing?

He said something in a tweet announcing the transgender ban that the military couldn’t afford the medical burden associated with Americans who sought to change their sexual identity. Get real! As critics of the Trump order noted, the military spends many times more money on medication that seeks to cure erectile dysfunction than it does on transgender-related medical issues.

Pentagon brass declared it intended to wait for a direct order from the defense secretary before it implemented the order. Good for them.

And good for the judicial panel in the District of Columbia for stopping this disgraceful discrimination against Americans who already are serving their country with honor and distinction.