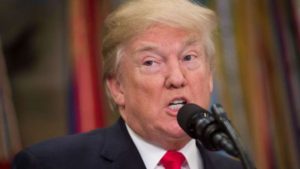 Donald Trump is at it once again.

Trump appears to be citing a Rasmussen poll that puts his approval rating a 46 percent. He said in a tweet that Obama’s poll standing in late December 2009 stood at 47 percent. Rasmussen is a generally Republican-friendly polling organization.

One qualifier is in order. The Obama poll numbers factored in all the surveys taken. They stood at 47 percent, just as Trump said.

But the president’s current poll average — compiled by RealClearPolitics — stands at 39.5 percent.

As if it really matters, which it doesn’t. As a critic of this blog reminded me, Trump isn’t running for re-election for another three years. That assumes, of course, that (a) he’s still in office or (b) wants to run for a second term.

If only the president would stop obsessing about polls.